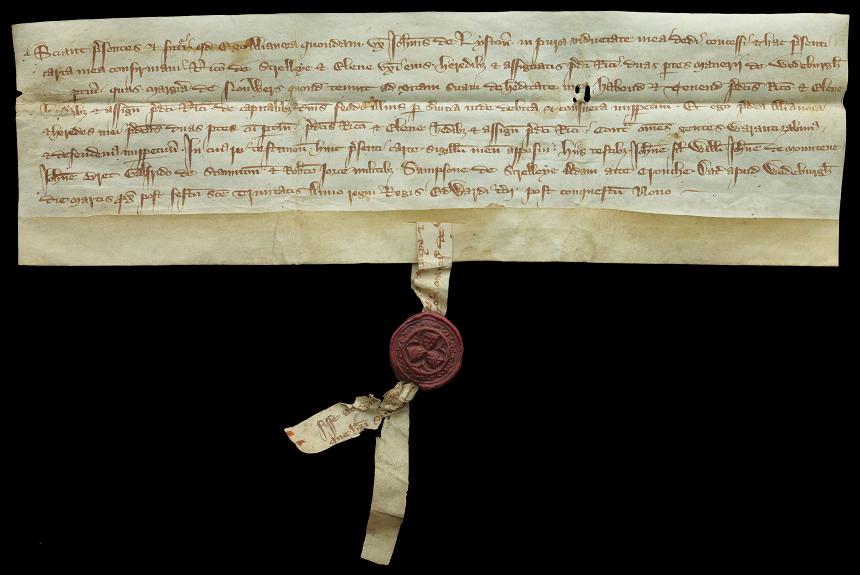 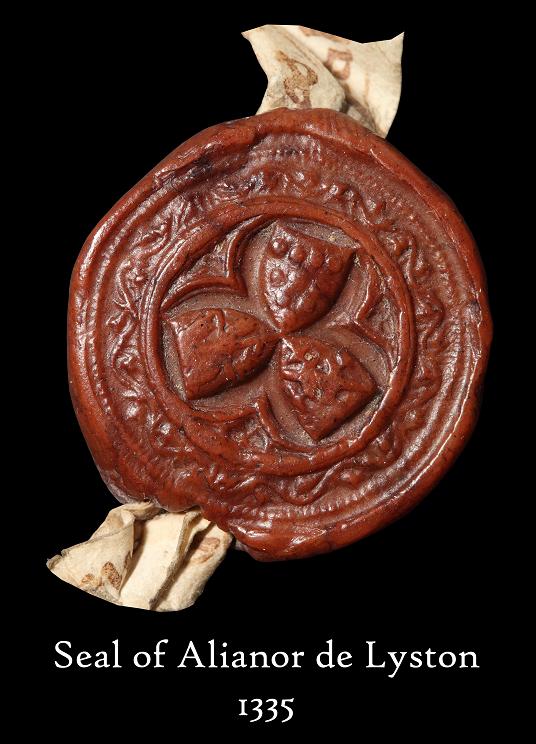 Charter of Eleanor, formerly the wife of John de Lyston, granting two parts of the manor of Woodborough [Nottinghamshire], formerly held of her inheritance by Margery de Nouwers for life, to Richard de Strelleye and Ellen, his wife, and the heirs and assigns of Richard. Woodborough, 13 June 1335.

The evidence concerning the descent of the manor of Woodborough in the early 14th century is not easy to interpret, but it appears that Eleanor inherited these two thirds of the manor as the heir of William de Creye.

In 1309 William de Trailly had conveyed by fine one third of the manor to William de Creye and Margery, his wife, and the heirs of William de Creye [CP 25/1/184/20, number 21]. This was followed by grants to William and Margery of the freehold land, goods and chattels in Woodborough belonging to Henry de Woodborough, brother of Ralph. [John Throsby's edition of "Thoroton's History of Nottinghamshire," 1796, vol. 3, p. 32. This account refers to a grant of the goods and chattels in 1316 and a confirmation of the freehold in 8 Edward II to William and Margery and the heirs of William.] In 1327 Sir Payn de Vylers (the son of Clemence, daughter and coheir of Ralph de Woodborough, mentioned above) and Isabel, his wife, appointed an attorney to receive seisin of a part of the manor and the service of Margery, late the wife of [illegible] de Cray, for a third of the manor which she held for life [Catalogue of Ancient Deeds, vol. 6, no C5627]. Thus it appears that Margery became the tenant of Sir Payn.

As the charter of 1335 shows, Eleanor later held two thirds of the manor, which had previously been held for life by one Margery de Nouwers. Either this included the third part acquired by William de Creye and Margery in 1309 - in which case Margery de Nouwers is to be identified with William's widow, and another third part must have been acquired at a different time - or else it represented the other two thirds of the manor - in which case William had presumably acquired those two thirds after the expiry of the life term of Margery de Nouwers. In either case, Eleanor's two thirds of the manor were granted to Richard de Strelleye and Ellen in 1335, and - if Thoroton's account is accurate - Sir Payn in the same year 'passed' to Richard and Ellen two parts of the manor, which Margery de Nowers had held for her life, of the inheritance of Sir William de Cray, knight (presumably meaning of the inheritance of the heirs of Sir William). If this is correct, it presumably refers to Sir Payn's interest as Eleanor's lord.

Finally, in 1337, Payn and Isabel conveyed by fine another third of the manor to Richard de Strelley and Ellen and the heirs of Richard [CP 25/1/185/29, number 176]. Thoroton says that this third had descended to Payn as his inheritance after the death of his mother Clemence. It seems to have been exchanged for tenements of Richard de Strelley in Kinoulton and Screveton [Nottinghamshire Archives DD/2517/1; cf Catalogue of Ancient Deeds, vol. 3, no C367, vol. 6, no C4945].

Other lands held by Sir William de Creye were later in the hands of the Liston family. The inquisition post mortem of Eleanor's husband John mentions a son of John and Eleanor named Thomas, presumably the same Thomas de Lystone who in 1346 was holding with others half a knight's fee in the hundred of Rokesley, Kent, formerly held by William de Crey [Archaeologia Cantiana, vol. 10, pp. 156, 157]. The inquisition also notes that John held lands in Ramsden Crays, Essex, as of the inheritance of Eleanor, and in 1330 a plea was pending between the king and Sir John de Liston concerning the advowson of Ramsden Crays [Calendar of Close Rolls, 1330-1333, p. 89]. Evidently this property, including the advowson, passed eventually to his son William [Calendar of Close Rolls, 1360-1364, pp. 527-8].

Eleanor's seal shows three shields of arms. At the top in the photograph above are the arms of Liston (vert ten bezants). At the bottom right are the arms of Sir William de Creye (gules a cross engrailed or, over all a bend azure), who bore the arms of Creye with a bend for difference [N. H. Nicolas, ed., A Roll of Arms, of the Reign of Edward the Second, p. 24 (1829)]. The arms at the bottom left appear to be those of the Trailly family (or a cross between four martlets gules). Comparison of the arrangement with that of similar seals and chronological considerations suggest that Eleanor's father may have been a Trailly, and her mother a daughter of Sir William de Creye.

[The photographs above were kindly provided by James Poynor, together with the transcript and translation, which I have modified slightly. The discussion of the descent of the manor of Woodborough, the Liston genealogy and the associated heraldry are based almost entirely on information generously provided by Tony Ingham, to whom I am very grateful.]